This model is a version of facebook/wav2vec2-xls-r-2b-22-to-16 fine-tuned mainly on the CGN dataset, as well as the MOZILLA-FOUNDATION/COMMON_VOICE_8_0 - NL dataset (see details below), on which a large 5-gram language model is added based on the Open Subtitles Dutch corpus. This model achieves the following results on the evaluation set (of Common Voice 8.0):

IMPORTANT NOTE: The hunspell typo fixer is not enabled on the website, which returns raw CTC+LM results. Hunspell reranking is only available in the eval.py decoding script. For best results, please use the code in that file while using the model locally for inference.

IMPORTANT NOTE: Evaluating this model requires apt install libhunspell-dev and a pip install of hunspell in addition to pip installs of pipy-kenlm and pyctcdecode (see install_requirements.sh); in addition, the chunking lengths and strides were optimized for the model as 12s and 2s respectively (see eval.sh).

QUICK REMARK: The "Robust Speech Event" set does not contain cleaned transcription text, so its WER/CER are vastly over-estimated. For instance 2014 in the dev set is left as a number but will be recognized as tweeduizend veertien, which counts as 3 mistakes (2014 missing, and both tweeduizend and veertien wrongly inserted). Other normalization problems in the dev set include the presence of single quotes around some words, that then end up as non-match despite being the correct word (but without quotes), and the removal of some speech words in the final transcript (ja, etc...). As a result, our real error rate on the dev set is significantly lower than reported. 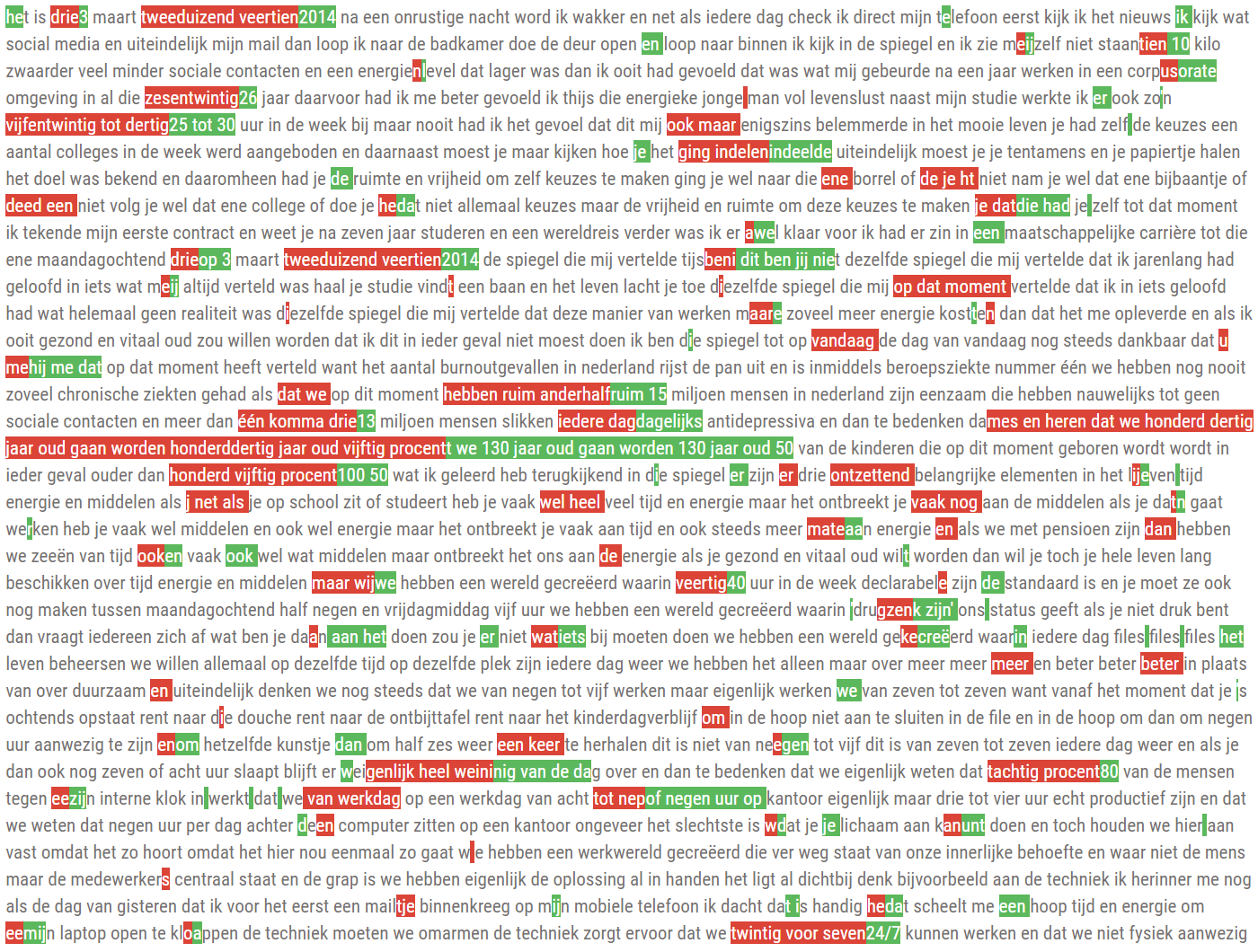 You can compare the predictions with the targets on the validation dev set yourself, for example using this diffing tool.

WE DO SPEECH RECOGNITION: Hello reader! If you are considering using this (or another) model in production, but would benefit from a model fine-tuned specifically for your use case (using text and/or labelled speech), feel free to contact our team. This model was developped during the Robust Speech Recognition challenge event by François REMY (twitter) and Geoffroy VANDERREYDT.

We would like to thank OVH for providing us with a V100S GPU.

The model takes 16kHz sound input, and uses a Wav2Vec2ForCTC decoder with 48 letters to output the letter-transcription probabilities per frame.

To improve accuracy, a beam-search decoder based on pyctcdecode is then used; it reranks the most promising alignments based on a 5-gram language model trained on the Open Subtitles Dutch corpus.

To further deal with typos, hunspell is used to propose alternative spellings for words not in the unigrams of the language model. These alternatives are then reranked based on the language model trained above, and a penalty proportional to the levenshtein edit distance between the alternative and the recognized word. This for examples enables to correct collegas into collega's or gogol into google.

This model can be used to transcribe Dutch or Flemish spoken dutch to text (without punctuation).

Hosted inference API
Automatic Speech Recognition
This model can be loaded on the Inference API on-demand.