You can also easily try this model with this Spaces demo app. Just provide two YouTube video links and you can see how similar those two videos are according to the model. For your convenience, the demo also includes a few predefined video pair examples.

This model is custom PyTorch model for predicting whether a pair of YouTube videos are similar or not. The model does not take video data itself as an input but instead it relies on video metadata to save computing resources. The input for the model consists of video titles, descriptions, transcripts and YouTube channel-equality signal of video pairs. As illustrated below, the model includes three cross-encoders for determining the similarity of each of the text components of the videos, which are then connected directly, along with a channel-equality signal into a single linear layer with a sigmoid output. The output is a similarity probability as follows: 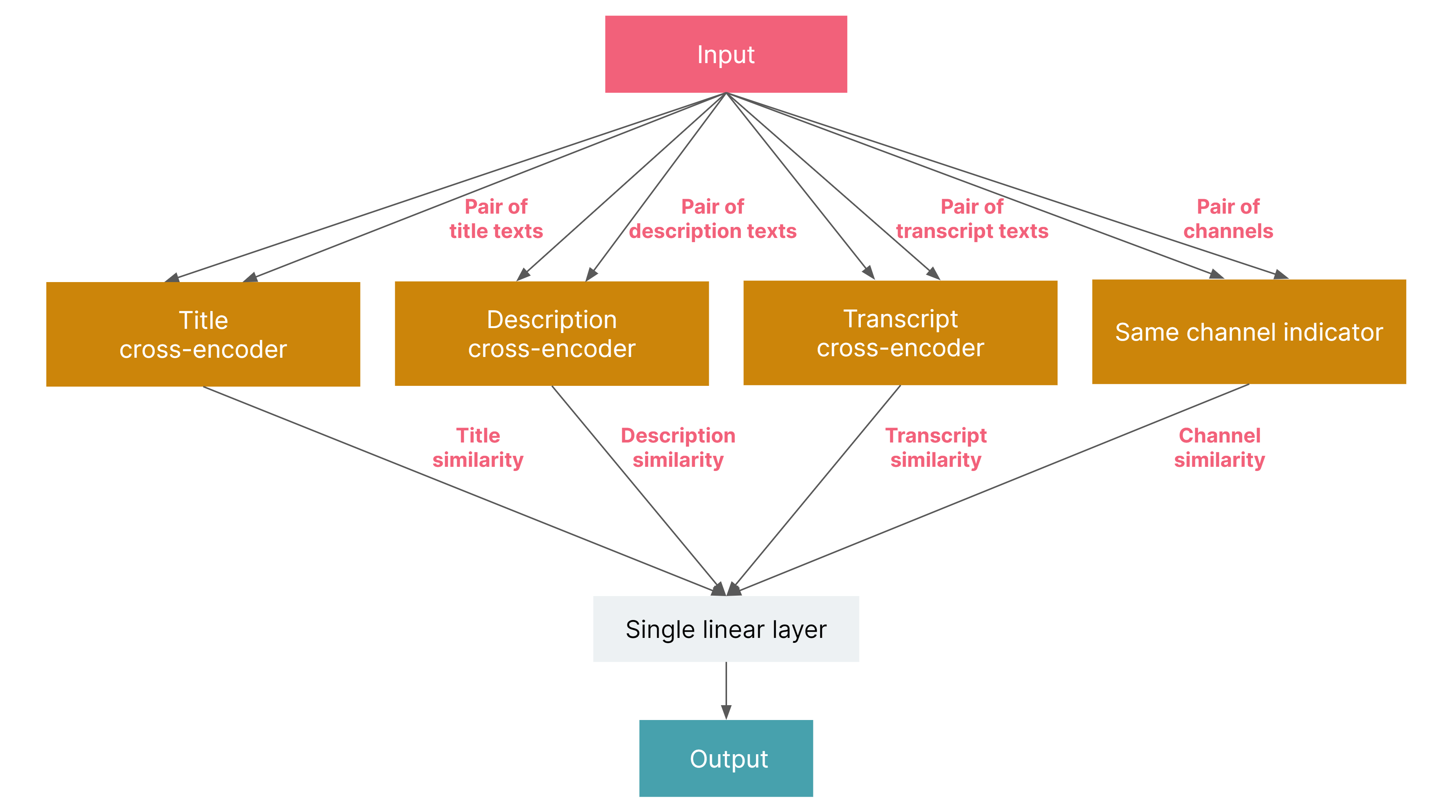 For pretrained cross-encoders, mmarco-mMiniLMv2-L12-H384-v1 was used to be further trained as part of this model.

Note: Possible model architecture enhancements are discussed a bit on this blog post and some of the ideas were implemented and tried on experimental v2 version of the model which code is available on the RegretsReporter GitHub repository. Based on the test set evaluation, the experimental v2 model didn't significantly improve the results. Thus, it was decided that more complex v2 model weights are not released at this time.

This model is intended to be used for analyzing whether a pair of YouTube videos are similar or not. We hope that this model will prove valuable to other researchers investigating YouTube.

As this model is a custom PyTorch model, not normal transformers model, you need to clone this model repository first. The repository contains model code in RRUM class (RRUM stands for RegretsReporter Unified Model) in unifiedmodel.py file. For loading the model from Hugging Face model hub, there also is a Hugging Face model wrapper named YoutubeVideoSimilarityModel in huggingface_model_wrapper.py file. Needed Python requirements are specified in requirements.txt file. To load the model, follow these steps:

And finally load the model with the following example code:

For loading and preprocessing input data into correct format, the unifiedmodel.py file also contains a RRUMDataset class. To use the loaded model for predicting video pair similarity, you can use the following example code:

Some more code and examples are also available at RegretsReporter GitHub repository.

The cross-encoders that we use to determine similarity of texts are also trained on texts that inevitably reflect social bias. To understand the implications of this, we need to consider the application of the model: to determine if videos are semantically similar or not. So the concern is that our model may, in some systematic way, think certain kinds of videos are more or less similar to each other.

For example, it's possible that the models have encoded a social bias that certain ethnicities are more often involved in violent situations. If this were the case, it is possible that videos about people of one ethnicity may be more likely to be rated similar to videos about violent situations. This could be evaluated by applying the model to synthetic video pairs crafted to test these situations. There is also active research in measuring bias in language models, as part of the broader field of AI fairness.

We have not analyzed the biases in our model as, for our original application, potential for harm was extremely low. Care should be taken in future applications.

A more difficult issue is the multilingual nature of our data. For the pretrained cross-encoders in our model, we used the mmarco-mMiniLMv2-L12-H384-v1 model which supports a set of 100 languages (the original mMiniLMv2 base model) including English, German, Spanish and Chinese. However, it is reasonable to expect that the model's performance varies among the languages that it supports. The impact can vary — the model may fail either with false positives, in which it thinks a dissimilar pair is similar, or false negatives, in which it thinks a similar pair is dissimilar. We performed a basic analysis to evaluate the performance of our model in different languages and it suggested that our model performs well across languages, but the potential differences in the quality of our labels between languages reduced our confidence.

Since the RegretsReporter project operates without YouTube's support, we were limited to the publicly available data we could fetch from YouTube. The RegretsReporter project developed a browser extension that our volunteer project participants used to send us data about their YouTube usage and what videos YouTube recommended for them. We also used automated methods to acquire additional needed model training data (title, channel, description, transcript) for videos from the YouTube site directly.

Thanks to our research assistants, we had 44,434 labeled video pairs to train our model (although about 3% of these were labeled "unsure" and so unused). For each of these pairs, the research assistant determined whether the videos are similar or not, and our model is able to learn from these examples.

Our training data of YouTube video titles, descriptions and transcripts tend to include a lot of noisy text having, for example, URLs, emojis and other potential noise. Thus, we used text cleaning functions to clean some of the noise. Text cleaning seemed to improve the model accuracy on test set but the text cleaning was disabled in the end because it added extra latency to the data preprocessing which would have made the project's model prediction run slower when predictions were ran for hundreds of millions of video pairs. The data loading and preprocessing class RRUMDataset in unifiedmodel.py file still includes text cleaning option by setting the parameter clean_text=True on the class initialization.

The text data was tokenized with mmarco-mMiniLMv2-L12-H384-v1 cross-encoder's SentencePiece tokenizer having a vocabulary size of 250,002. Tokenization was done with maximum length of 128 tokens.

With the final test set, our models were achieving following scores presented on the table below:

Finally, we're so grateful for the 22,722 RegretsReporter participants who contributed their data.

If these models are useful to you, we'd love to hear from you. Please write to publicdata@mozillafoundation.org