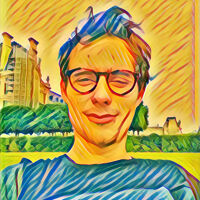 Sentence embedding is a method that maps sentences to vectors of real numbers. Ideally, these vectors would capture the semantic of a sentence and be highly generic. Such representations could then be used for many downstream applications such as clustering, text mining, or question answering.

We developed state-of-the-art sentence embedding models as part of the project "Train the Best Sentence Embedding Model Ever with 1B Training Pairs". This project took place during the Community week using JAX/Flax for NLP & CV, organized by Hugging Face. We benefited from efficient hardware infrastructure to run the project: 7 TPUs v3-8, as well as guidance from Google’s Flax, JAX, and Cloud team members about efficient deep learning frameworks!

Unlike words, we can not define a finite set of sentences. Sentence embedding methods, therefore, compose inner words to compute the final representation. For example, SentenceBert model (Reimers and Gurevych, 2019) uses Transformer, the cornerstone of many NLP applications, followed by a pooling operation over the contextualized word vectors. (c.f. Figure below.) 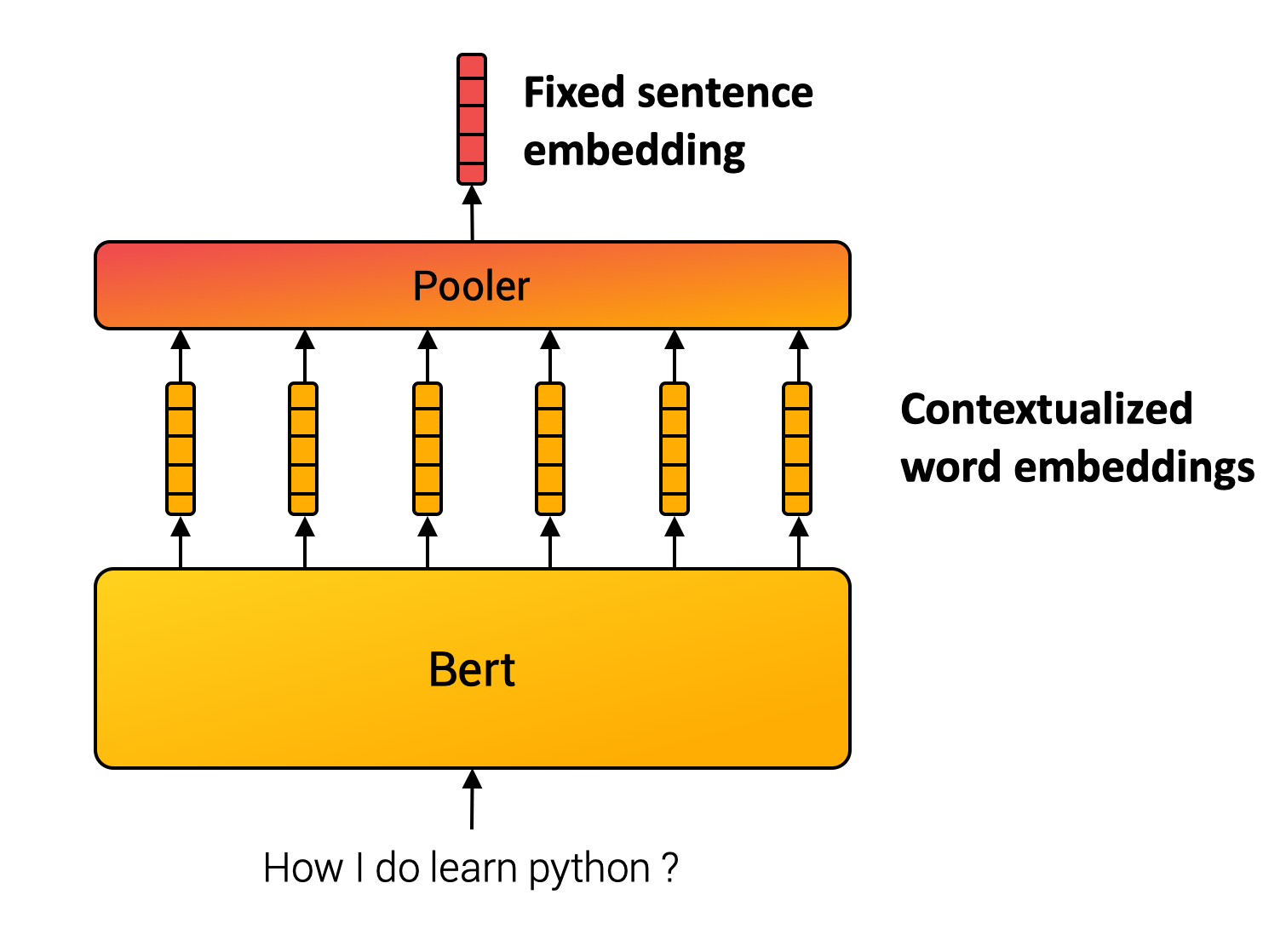 The parameters from the composition module are usually learned using a self-supervised objective. For the project, we used a contrastive training method illustrated in the figure below. We constitute a dataset with sentence pairs (ai​,pi​) such that sentences from the pair have a close meaning. For example, we consider pairs such as (query, answer-passage), (question, duplicate_question),(paper title, cited paper title). Our model is then trained to map pairs (ai​,pi​) to close vectors while assigning unmatched pairs (ai​,pj​),i=j to distant vectors in the embedding space. This training method is also called training with in-batch negatives, InfoNCE or NTXentLoss. 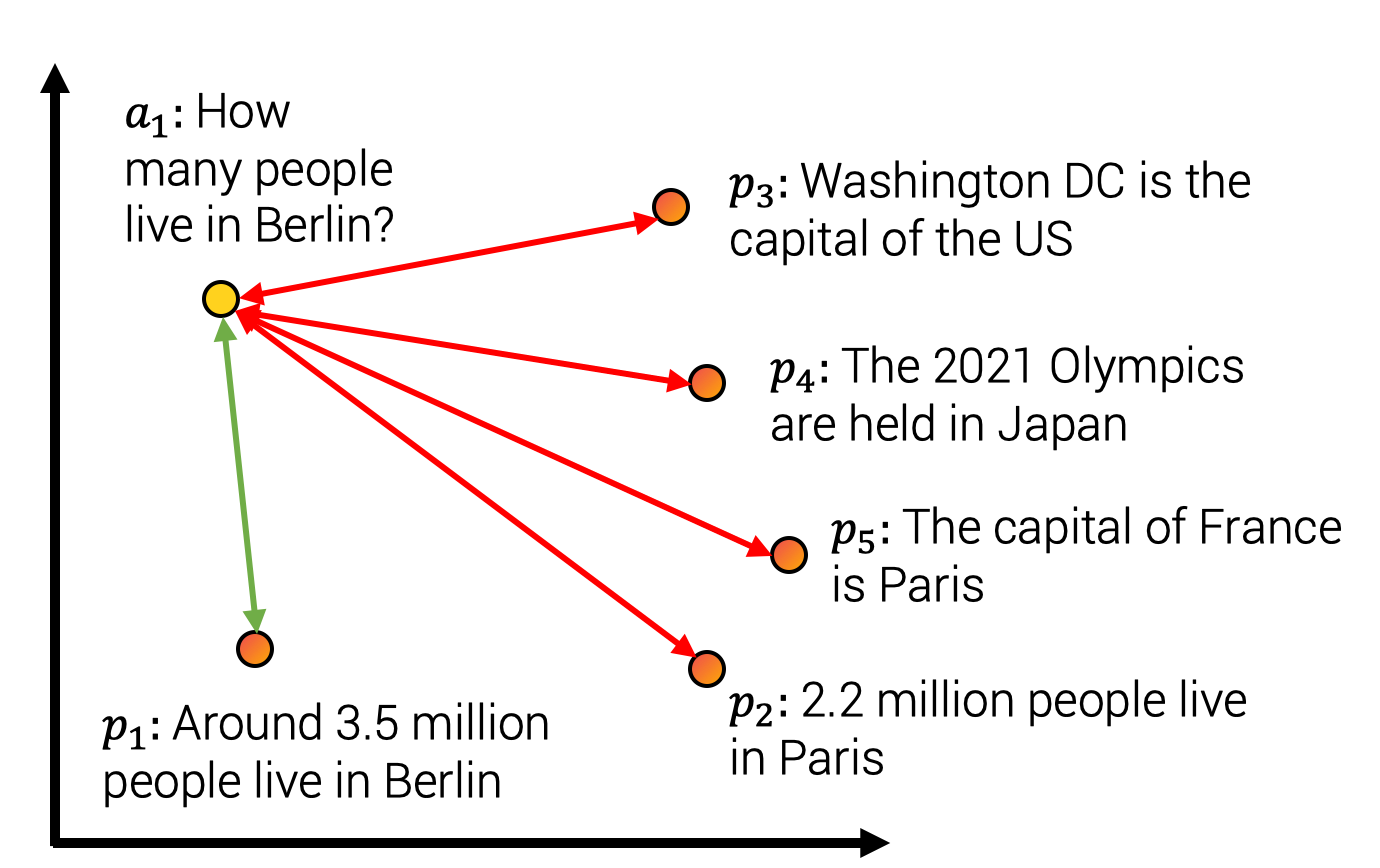 Formally, given a batch of training samples, the model optimises the following loss function:

An illustrative example can be seen below. The model first embeds each sentence from every pair in the batch. Then, we compute a similarity matrix between every possible pair (ai​,pj​). We then compare the similarity matrix with the ground truth, which indicates the original pairs. Finally, we perform the comparison using the cross entropy loss. 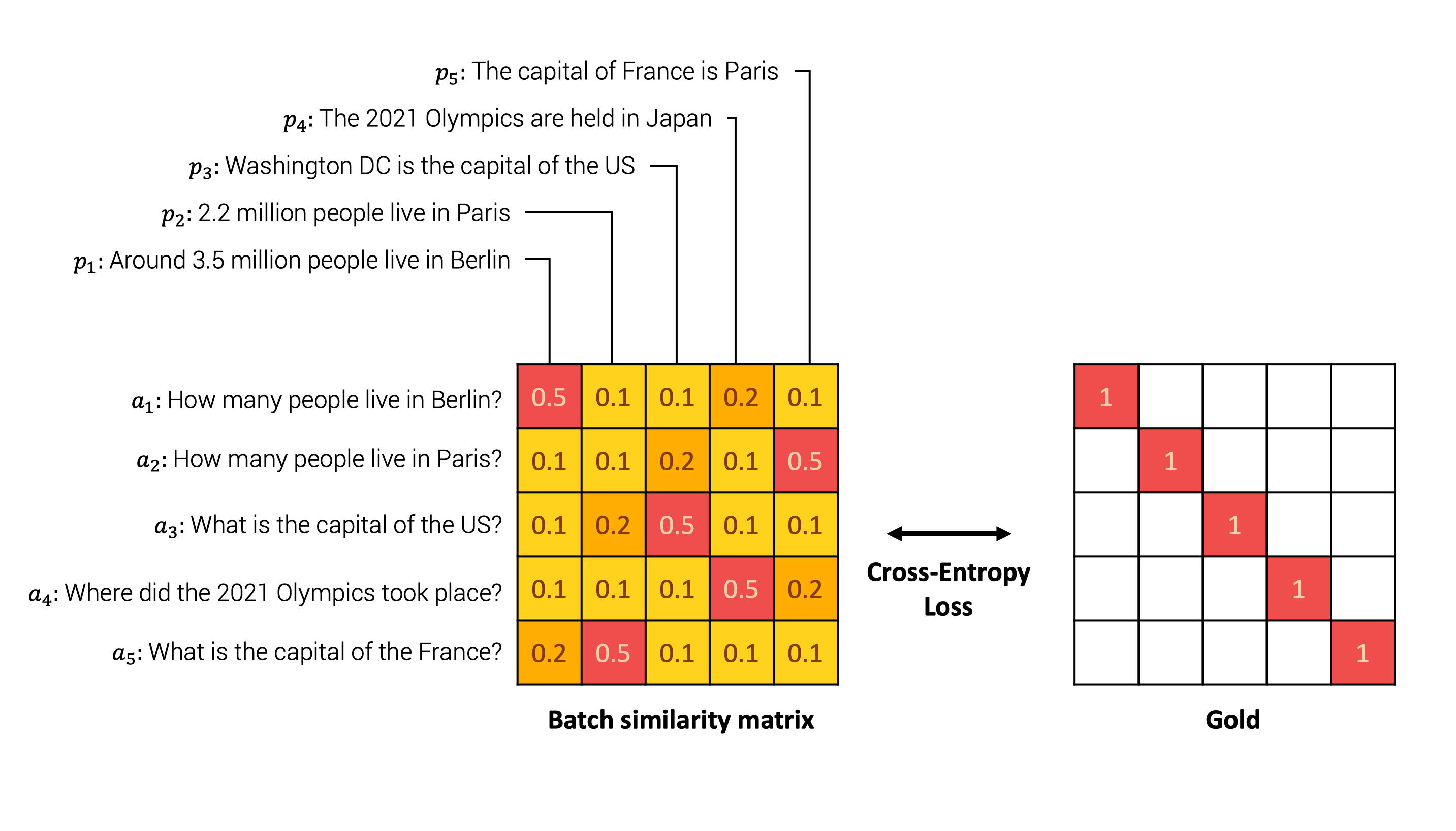 In practice, we used a scaled similarity because score differences tends to be too small and apply a scaling factor C such that simscaled​(a,b)=C∗sim(a,b) with typically C=20 (Henderson and al., 2020, Radford and al., 2021).

In our method, we build batches of sample pairs (ai​,pi​). We consider all other samples from the batch, (ai​,pj​),i=j, as negatives sample pairs. The batch composition is therefore a key training aspect. Given the literature in the domain, we mainly focused on three main aspects of the batch. 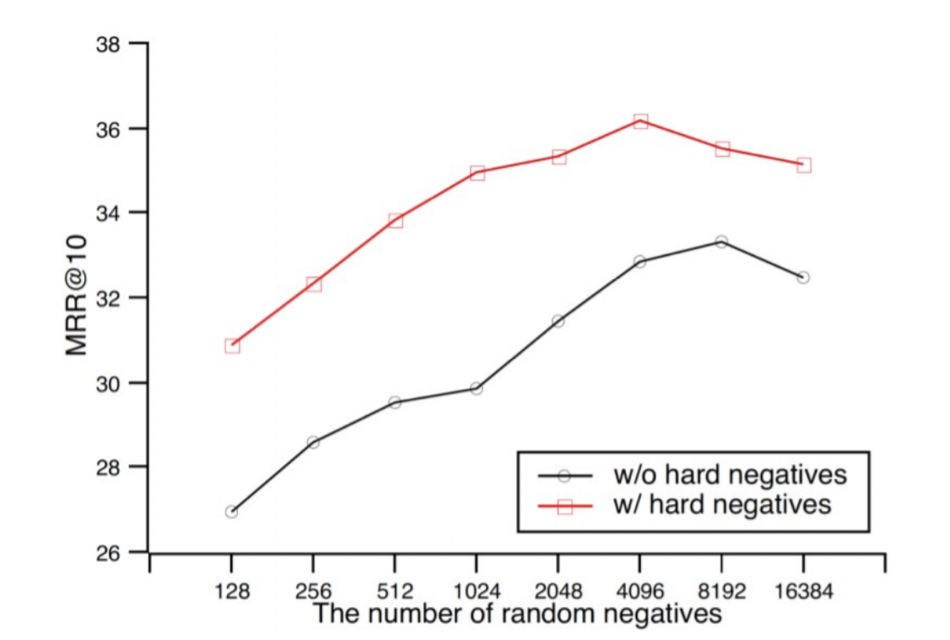 We concatenated multiple datasets to train our models. We built a large batch and gathered samples from the same batch dataset to limit the topic distribution and favor hard negatives. However, we also mix at least two datasets in the batch to learn a global structure between topics and not only a local structure within a topic.

As mentioned earlier, the quantity of data and the batch size directly impact the model performances. As part of the project, we benefited from efficient hardware infrastructure. We trained our models on TPUs which are compute units developed by Google and super efficient for matrix multiplications. TPUs have some hardware specificities which might require some specific code implementation.

Additionally, we trained models on a large corpus as we concatenated multiple datasets up to 1 billion sentence pairs! All datasets used are detailed for each model in the model card.

General sentence embeddings might be used for many applications. We built a Spaces demo to showcase several applications:

The Community week using JAX/Flax for NLP & CV has been an intense and highly rewarding experience! The quality of Google’s Flax, JAX, and Cloud and Hugging Face team members' guidance and their presence helped us all learn a lot. We hope all projects had as much fun as we did in ours. Whenever you have questions or suggestions, don’t hesitate to contact us! 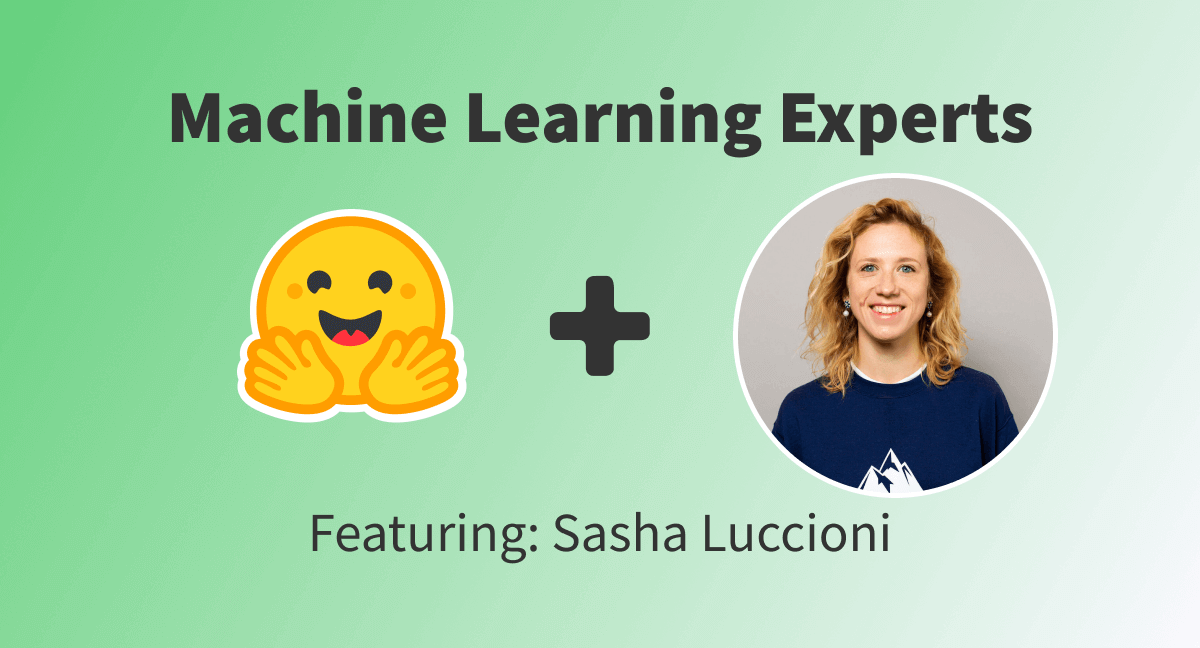 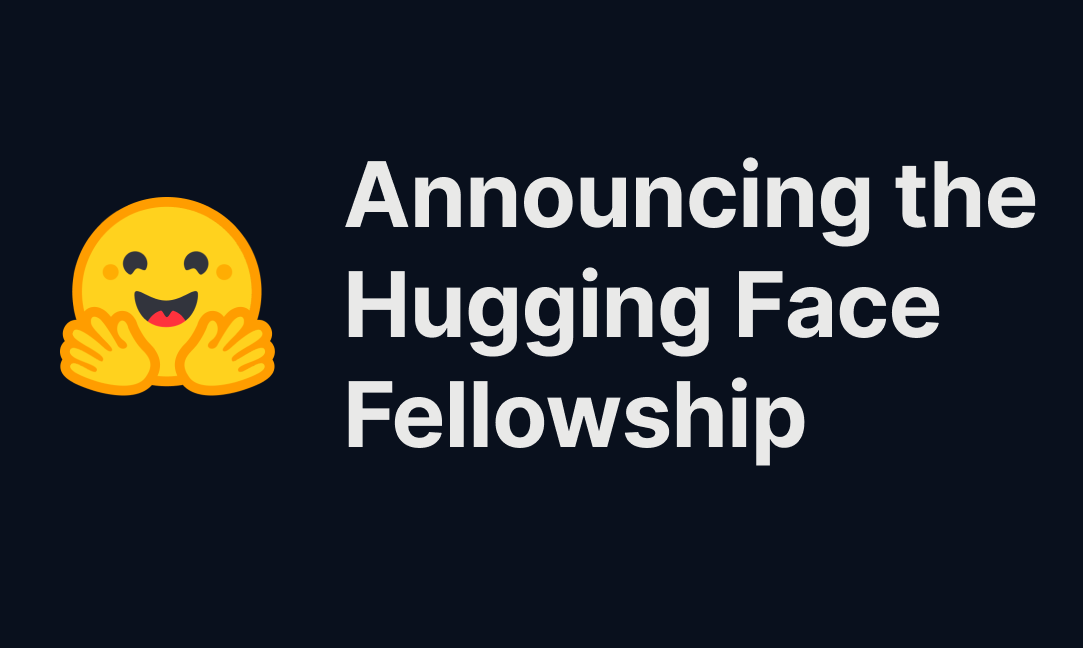